"The only thing you have to lose is your ice!" 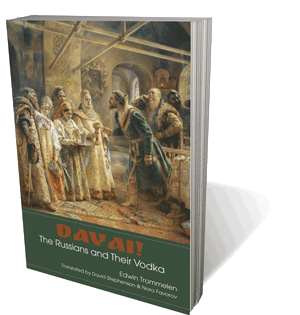 Davai! The Russians and Their Vodka

You cannot separate Russians from their vodka or vodka from Russia. For over 600 years, this proud Slavic culture has – for good or ill – been inextricably bound up with their national drink. In this comprehensive, quixotic and addictive book, Edwin Trommelen explores all facets of the Russian obsession with vodka, through the lenses of history and literature. Hundreds of wonderful quotes from literature, theater and poetry are presented in both their Russian original and English translation, making this also a useful guide to improving one’s Russian through the lens of this ancient drink. 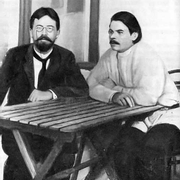 Where we collect some of the best thiings ever said about vodka that we have come across... Feel free to share your own as well!

Pulkheria Ivanovna was most entertaining when she led her guests to the zakuska table. "Now this," she would say, removing the stopper from a flask, "is vodka infused with St. John's wort and sage. If the small of your back or your shoulder blade aches, it really hits the spot. This vodka over here is made with centaury. If you've got a ringing in your ears or shingles on your face, it's just the thing. And this one's distilled from peach pits here, take a glass, what a wonderful smell! If you've bumped your head against the corner of a cupboard or the table when getting out of bed, and a lump's sprung up on your forehead, then all you have to do is drink a glassful before dinner. The minute you take your hand away, the lump will disappear, as if it had never been there at all."

...when you sit down you should immediately put a napkin around your neck and then, very slowly, reach for the carafe of vodka. Now you don't pour the dear stuff into any old glass ... oh no! You must pour it into an antediluvian glass made of silver, one which belonged to your grandfather, or into a pot-bellied glass bearing the inscription "Even Monks Imbibe!" And you don't drink the vodka down right away. No, sir. First you take a deep breath, wipe your hands, and glance up at the ceiling to demonstrate your indifference. Only then do you raise that vodka slowly to your lips and suddenly. sparks! They fly from your stomach to the furthest reaches of your body.

Nobody in the world knows what [vodka] is made out of, and the reason I tell you this is that the story of vodka is the story of Russia. Nobody knows what Russia is made of, or what it is liable to cause its inhabitants to do next.

— Will Rogers, Comparing Vodka and Russia

Call me what you like, only give me some vodka.

I would rather live in Russian on black bread and vodka than in the United States at the best hotels.

Vodka is tasteless going down, but it is memorable coming up.

We don't want donuts; bring us a whole sheep, and plenty of vodka, not vodka with all sorts of fancies, but pure, foaming vodka that hisses and bubbles like mad.

Vodka is our enemy, so we'll utterly consume it!

The relationship between a Russian and a bottle of vodka is almost mystical.

Vodka spoils everything but the glasses.

This drink has a magical power. It strengthens the weak, and revives those who have fainted. Those tired after work and physical activity can return their life forces by this drink much sooner than by nourishment. ... It works as a diuretic, an appetizer, an antitoxin..

— Carolus Linnaeus, Vodka in the Hands of a Philosopher

Russians will consume marinated mushrooms and vodka, salted herring and vodka, pickled cucumbers and vodka - anything and everything with vodka.